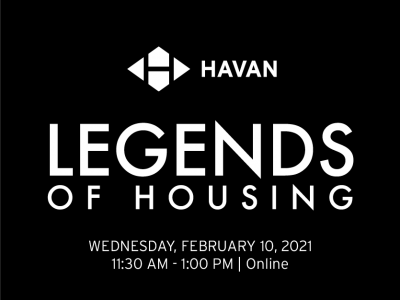 HAVAN’s Legends of Housing is a high-calibre annual event which will be moved to a live virtual stage in February 2021. Featuring three of the construction industry’s top influencers and trailblazers who have helped shape the Metro Vancouver housing market as it is today, the Legends will share their personal histories, their experiences in this changing market, what they have done to be a trailblazer (philosophy, goals, community impact), how they have adapted to this global crisis, and offer their predictions on the future of the industry.

The moderator is industry-respected Kirk LaPointe, BIV Publisher/Editor-in-Chief, who will facilitate the conversations, questions, and ease amongst the Legends.

Legends of Housing will be another must-attend live event, bringing together C-suite and upper-level executives, government representatives, other industry leadership, developers, builders, and all levels of HAVAN members at this one virtual event. The event will be streamed through an online platform.

Thank you to our sponsors: