Langley MLA helps homebuilders look ahead to the future

Rich Coleman, the Langley East Liberal MLA who was once the minister of housing – among many other titles – spoke to a room of more than 250 housing developers and builders on Wednesday night in Burnaby.

The event was hosted by the Homebuilders Association of Vancouver. And among the evening highlights, the panel spoke to a continually growing needs for available labour, as well as a necessary philosophy change in residential development that would see a shift from building single-family home to planning and constructing more affordable multi-family complexes.

The change is a sign of progress, and a reiteration to the association’s commitment to better express its goals and connect resources to consumers, while strengthening benefits to its members, de Wit elaborated.

“Our goal remains the same – to help build the homes, and shape communities where people aspire to live. Homebuilding is at the heart of what our members do. Placing an emphasis on Homebuilders makes sense,” he said.

”We’re excited for the opportunity to empower our members to better connect with consumers. Homebuilders Association Vancouver is a simple, yet strategic name change, which allows us to quickly convey a clear message across all platforms to the public,” de Wit said, noting the abbreviated acronym HAVAN is a memorable word, easily said, and one which plays off the idea of, “home as one’s haven.” 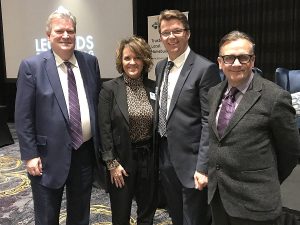 de Wit also said part of the change was spawned by what he describes as a significant shift in the media landscape, and how people search and consume data.

“While traditional media remains important, in today’s online world, it is important to be seen, and remembered across digital and social platforms,” he said.

A not-for-profit association, HAVAN is continuing its affiliated with both the provincial CHBA BC and national CHBA offices. It is comprised more than 1,100 members – developers, builders, renovators, suppliers, sub trades, and professionals, who build 65 per cent of Metro Vancouver’s homes.

“Ours is an association of knowledgeable, trusted, resourceful, and local professionals in the home construction industry. Our members have shared a commitment to building excellence since 1974. HAVAN provides both industry and consumer education, and actively liaise with local municipal governments with the focus of meeting Metro Vancouver’s housing needs,” de Wit concluded.