In May 2021, the Homebuilders Association Vancouver released a report outlining the BC Energy Step Code Implementation Across the Metro Vancouver region.  The report provides a clear snapshot of the diversity of implementation schedules across the Lower Mainland, highlighting some municipalities not having yet opted in while others have adopted Step 5, the highest requirement of the Code.

The Step Code, introduced as an optional compliance path in the BC Building Code to help BC meet its goal for all new buildings to be net-zero energy by 2032, is meant to support local governments to incentivise or require net-zero energy in new construction that goes above and beyond the requirements of the provincial code.  With the introduction of the Step Code, the provincial government recommends a phased implementation approach over the five levels to allow the marketplace, industry and resources time to adapt. 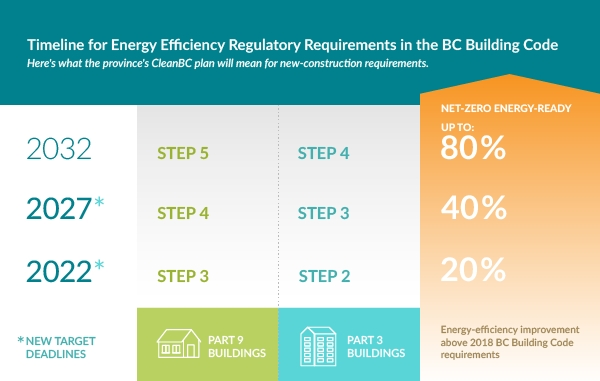 While HAVAN strongly supports the shift towards climate-friendly construction, there are concerns that some local governments pushing timelines to go beyond the recommended stepped approach are potentially creating a discrepancy in implementation across Metro Vancouver municipalities. In addition to causing confusion for industry professionals, an accelerated implementation can contribute to increased costs and time-frame of construction as resources are pushed to adapt without sufficient lead times.

As members of the BC Energy Step Code Council and of its Part 9 sub-committee, HAVAN is advocating for the more reasoned timelines set out by the government to ensure best outcomes for the industry, our members and ultimately the end user, the homeowner.